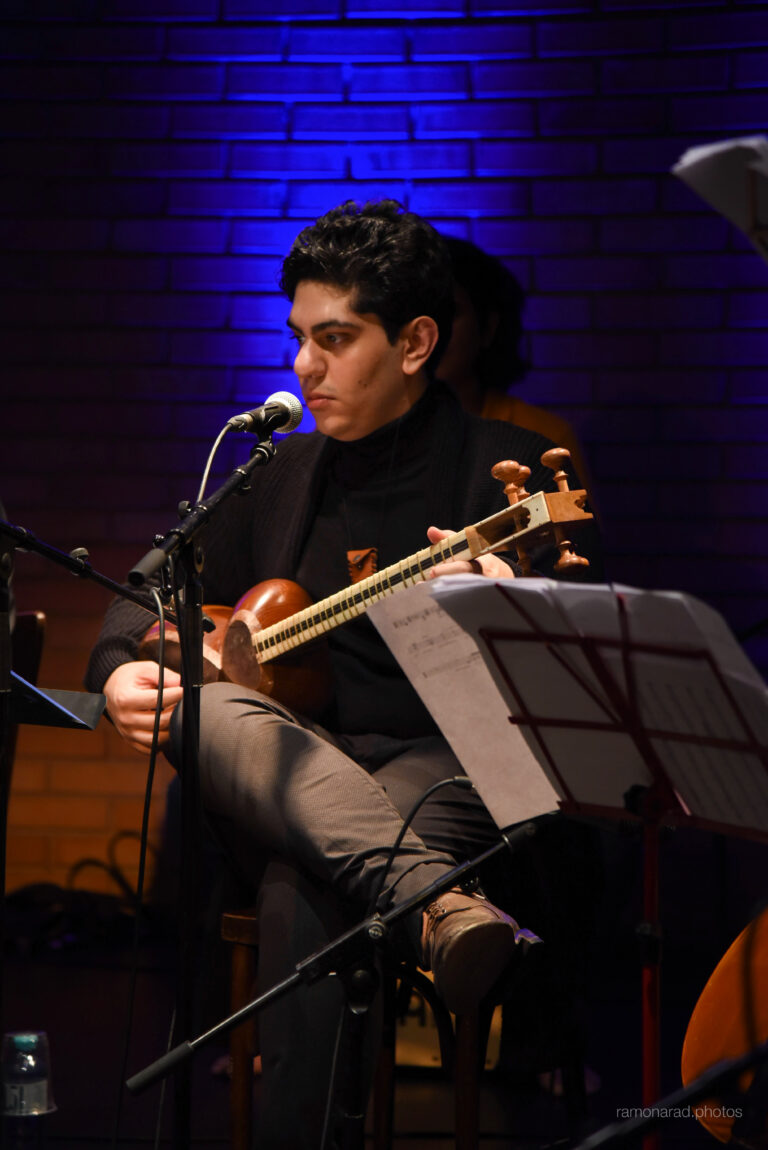 At the age of 4, he started learning and playing the Iranian tar instrument, and two years later, he officially stepped on the music stage for the first time by performing a tar concert.

He began his studies at the Music High School of Isfahan in 2012 while studying basic composition and tar with Maestro Hossein Alizadeh and Houshang Zarif.

In 2014 he founded the Nafis Ensemble and has given many concerts with Nafis and much other ensembles as a Tar player , Vocalist and composer in Tehran, Isfahan, Shahre-Kord Yazd and Neyshabour .

As a composer he has composed 2 pieces for the Chamber Orchestra of Tehran and the National Orchestra of Isfahan.

After graduating from high school , he moved to Austria at the age of 17 and studied bachelor studies in music composition with Prof. Carola Bauckholt & Christoph Cech at the Anton Bruckner University of Linz .

In 2018 he was a guest of a radio show on Radio FRO & ORF Upper Austria in the program “Unisounds” [7] about the compositional interaction of Persian and European music and contemporary music.

In 2019 he won the prize of “The Seven Lives of the Maximilian Festival” ((Max 500)) in Tyrol .
In the same year he also performed his compositions in the Theater am Spittelberg in Vienna [5] with the Famous Persian singer Vahid Taj, accompanied by Solter Plus Ensemble and the Nafis Ensemble.

In 2020 he appeared with the WorldMusic Trio at the Linz International Short Film Festival [6] and wrote the soundtracks for the short film “Facing” in the same year.

In 2020 he recorded his first music album in the genre of Persian-World Music with Vahid Taj .

In 2021, he started his studies at MUK University (Former Wiener Konservatorium) in Vienna under supervision of Prof. Dirk D’ase

In 2021 and 2022, he collaborated with Post-Dervish Chant, with the concept of contemporary and Sufi dance and music in 3 performances at “Ars Electronica Festival” , “Lange Nacht der Bühne Festival” and “Grüner Anker”

Since 2021, Moazeni has an artistic residency in Austria, and from the beginning of 2022, he is a member of special associations for composers and art creators in Austria (AKM and Austro Mechana).